Today was epic but brutal. We cycled through some beautiful mountains and had a 800 meter climb in a 10 km stretch. I struggled to make it up the climb. All day kids yelled “you you you” which means hello and ran next to us. I enthusiastically waved back and responded the same. I passed many kids and saw one girl pick up a rock but she was so excited that I was saying hello and acknowledging her presence that I think she forgot entirely about her intention to throw the rock. An excited kid also grabbed onto the back of my bike and pushed me up a small portion of the hill. The roads were well paved and very quiet with few vehicles; a sign of the political unrest. In the recent past, cyclists were forced to skip this whole section due to open gunfire and ethnic fighting. I saw a number of men in groups carrying rifles throughout the day. I smiled and waved to most of them and they were all friendly. I stopped and gestured with one group to ask if it was safe to proceed and they seemed to think so. I also passed a flipped 18 wheel truck blocking the highway with an armed man seated inside. He didn’t want his picture taken. I wondered why they left the truck blocking the road and came to the conclusion that it was likely a blockade left there strategically to allow the armed men to control who can pass through. Just as it was getting dark and within a few miles of our goal the town of Aiykl I came upon a military checkpoint where we all had to stop and were required to stay. We all slept in an empty cement floored building for the night. We had pasta with some of the military men whom openly told us we would pay more than other military personnel because we were Ferengi or foreigners. This was my first experience paying the “white man tax” which is quite common in Ethiopia. We were also adamantly told not to go outside at night. I could only postulate why. I had another incidence of food poisoning and pooped in a bag in the corner of the room fearful that if I went outside I might be mistaken for a rebel and shot. 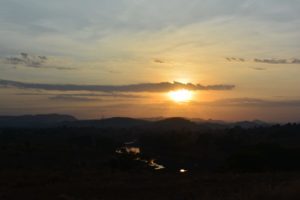 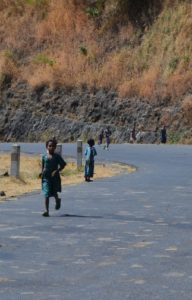 Getting chased by pack of children asking for money 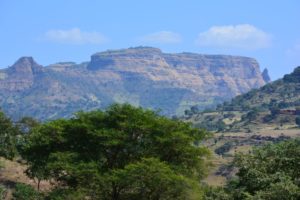 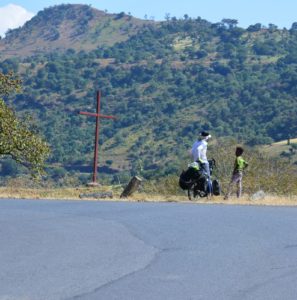