We were not allowed to continue on bicycle to Gonder and instead took a police convoy with a man on a sniper rifle and several other men standing armed and alert with fingers trigger ready semiautomatic rifles. The streets were empty. For most of our 60 km to Gonder we saw very few people. A few miles into the ride one of the men accidentally released his clip on his rifle. It consequently fell onto the pavement scattering rounds everywhere. The man was chastised for his mistake and we waited while several men jumped out and collected/counted all the rounds to assure that they found every last bullet. This whole incident inspired little confidence in our escorts. I can thankfully say that the ride was uneventful and the military personnel were all very polite. They even shared some of their energy ration biscuits. I wouldn’t be surprised if these snacks have a 100 year shelf life they were pretty plain and made the USA MREs seem extremely flavorful in comparison. Nonetheless it was nice having bland food that didn’t upset my stomach. When we arrived in Gonder someone snatched my phone while I was assembling my bags on my bike. I had a tough day. Getting a new phone involved first buying a phone that didn’t work and having to return it to the con man and argue and yell at him for an hour with a couple of local guys that were helping me out. I was able to get most of my money back. I then purchased what I thought was a new phone only to discover several days later that the phone was hacked and had spyware installed on it. 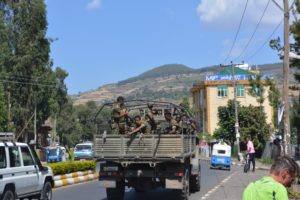 Police escort to Gonder was fun even though I was a bit apprehensive at first.