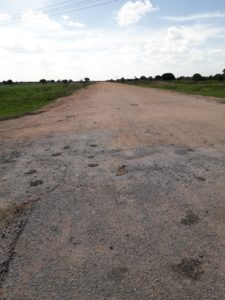 January 24th through 28th we rode from Arusha Tanzania to Itigi Tanzania, 450 kilometers,  where I took the day off on the 29th. We were warned by the owner of the guesthouse where we stayed on January 26th,  that one of the towns we were passing through called Gehandu was very dangerous.   He explained that an aggressive tribe likes to kill westerners and are armed with spears. Fortunately we had no trouble passing through the town and people were very friendly. I take all the fear mongering I hear from locals in small towns with a grain of salt. Its not uncommon to meet people that hold prejudices about their neighbors. I passed through a number of small villages and was greeted frequently by friendly people and asked questions about where we are going. I ate rice and beans at just about every meal.    The last 25 kilometers of the road into Itigi were dirt.  I ride cautiously on these dirt roads because my bike frequently fish tails when I hit sandy spots.  After Itigi, the next 500 kilometers are dirt and will be challenging.  We are also riding along a game reserve. I’ve been warned by locals to avoid early morning and late afternoon riding because there are lions.