We left Rubirizi today and headed into queen Elizabeth Park. The roads were in poor condition.  In the park I spotted an Elephant (unfortunately the picture didn’t come out on my camera) and also saw several water buffaloes. Midday it was swelteringly hot and humid. I stopped at a roadside store and purchased a pineapple drink and some water. After my first drink of the pineapple juice,  I thought I had been poisoned. The drink tasted like cherry cough syrup with menthol. I asked some of the locals and was relieved when they told me the drink is supposed to taste this way. I gave one of them the drink and continued on. Towards the end of the day We found a bar/lodge establishment. The bar lady told me the rooms were 115000. I knew this was too high and told her so.  I was willing to pay 10000 ($2.70) for my own room. That’s what Arthur and I had spent for our own rooms over the last couple days. It was one of the easiest negotiation I’ve ever taken part in. She seemed content with my offer and accepted immediately with no counter offer. There was a sewing shop in town and I was able to replace my broken shorts zipper again. This is the third zipper that I’ve put on the same shorts pocket and hopefully the last replacement I will need. I had an egg burrito and beans for dinner.  Around 11 P.M. I heard some banging on my door. A local man, I had talked with earlier in the day, said Arthur had run off into the distance,  and in a drunken rage threatened to fight the locals when they asked him to come back to the hotel. I was able to find him and convince him to stumble back to the hotel. His wallet and room key were gone, but fortunately he didn’t have anything in his wallet aside from a few dollars and the receptionist had an extra key.

Tourist trap and crazy folk medicine at the equator

The guys who cooked us breakfast this morning 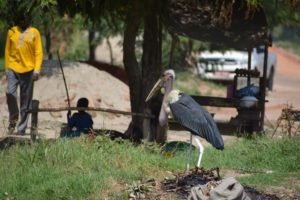 These large birds are everywhere in Uganda 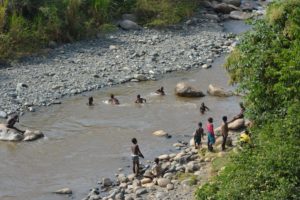