This morning upon entering the bathroom I was greeted by clouds of buzzing mosquitoes. Thankfully I had a mosquito net on my bed last night. Up to this point the mosquitoes have not been bad.  Bahir Dar is situated along lake Tana, which along with a new invasive plant growing in the lake, serve as a perfect breeding ground for the mosquitoes. I took a quick cold shower and we were on the road. We had breakfast at our hotel and caught up with Tomas and the Canadians who had left before us from the town of Merawi. I asked the guys to keep an eye on my stuff while I searched out a pit toilet to pee. I would normally just urinate behind a bush, but In Ethiopia people seem to be everywhere it’s hard to have any privacy. When I returned I noticed that my Garmin GPS was gone. I walked up to a man who had just passed my bike and said hello while looking at his pockets for the familiar bulge of my GPS. Some other locals came over and could see that I was disturbed and asked me what the problem was. I told them what had happened and they incorrectly assumed the man I was talking to had stolen it and started smacking him. I tried to intervene,  and they stopped eventually after interrogating the poor man. A crowd quickly formed around us at the cafe. A local man came up to me and said don’t worry we will help you out. After 15 or so minutes a teenager came up and passed my garmin to the man who returned it to me and apologized on the kids behalf. I was so relieved.  Overall the whole experience was stressful,  but it was uplifting to feel like this Ethiopian man and village was looking out for us. The man told us that they were not bad people. Shortly after leaving this town Tomas broke his chain. We all stopped and helped him put on a new chain. The rest of the day was pretty peaceful and people were very friendly until the last 20km. From Adis Kidani until we made it to Injibara we encountered more hostile stares  and rock throwing from the locals. I passed a group of school children in uniforms who jeered at me and one girl who was carrying a branch roughly 3 times her height wacked me with it. I stopped my bike and was deciding how to respond when I saw the adult chaperone of the school children staring at me menacingly. I resumed riding, not wanting to test the man, as he looked ready to put a knife in my back. It seems like this sort of behavior is condoned. I later learned that Simon had rocks thrown at him by the same group and when he went to throw some back the same man looked at him and shook his head. 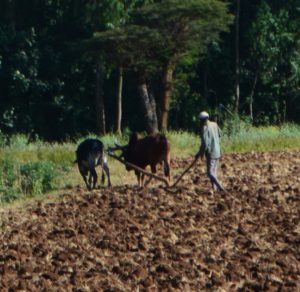 Farmer tilling his field with oxen. 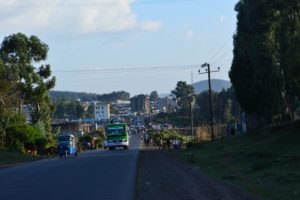 Finishing the day … riding into Injabara.