In the morning I drank some yogurt that I had been making for a couple days and swallowed my daily malaria pill.  I also had a few pieces of bread. Two days ago I added powdered milk, water, and a bit of yogurt for the bacteria cultures to get it started. The drink was sour and very good.  I hope to continue making this yogurt drink which tastes great and I’m hoping might make my stomach a bit more resistant to becoming ill.  Throughout the day we passed through checkpoints.  Typically I ride fast through these checkpoints and wave to the police and hope they don’t ask us to stop. We lucked out today and didn’t have to waste time stopping for any of the checkpoints.
Mid day we arrived in Omdurman, a neighboring city to Khartoum. It felt overwhelming after spending the last couple days in the desert with very little visual stimuli.  People were everywhere walking through the streets buying food and fresh produce.  The roads were clogged with cars and trikes puffing out black clouds of smoke and people riding on donkeys. It was difficult navigating through the traffic and we had to make our own route because google routed us through dirt alleyways and terrible quality roads.  It took us what felt like several hours to make it to Khartoum and the Acropole Hotel. Once there, I walked all around the area. I have now developed a near insatiable appetite from all the biking and ate 4 bowls of street food for dinner. I had corn starch sweet puddings, beans and some type of grain, and fruit salad. At our hotel I met two Canadians named Simon and Adrian as well as an Irish man named Tomas. All of whom are cycling to South Africa. 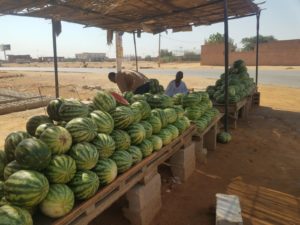 Purchased a watermelon and attached to back netting on bike. 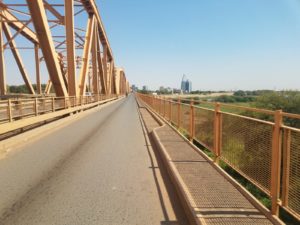 Riding into Khartoum across bridge. Surprised to see western style sky scrapers here in Sudan. All other buildings up to now have been made from mud or brick. 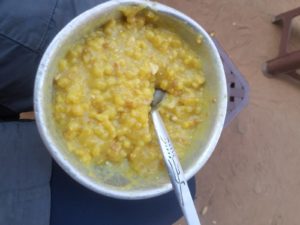 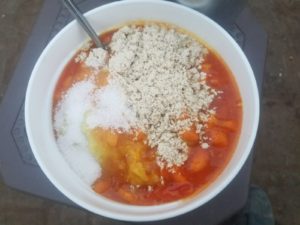 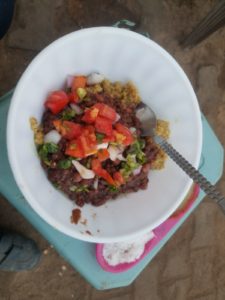 Beans and some sort of grain.