We awoke again at 3:30 and experienced a beautiful sunrise. I found some cool caves on the side of the road in the dirt but decided not to explore deeper because a gaseous smell was emanating out from them.  A couple hours into the ride a man in his vehicle tailed me for a couple miles. This made me a bit nervous but the man eventually drove beside me and said hello. I realized afterwards that even though his behavior was creepy he was just genuinely curious. Later we met two groups of cyclists, a couple from Holland and an American man. All of whom had started at Capetown and were near the end of their journey. I had my first experience using a pit toilet when we stopped in a small town. Asking for the location of a toilet proved difficult. The local I was talking with knew very little English. To my embarrassment I eventually resorted to gesturing pooping by squatting in front of him. He eventually understood and showed me to the pit toilet. I have come to understand that using toilet paper is uncommon in Sudan and people typically use their left hand and water when using the pit toilet. There are some sanitary concerns as I have never seen any soap to wash your hands with around these facilities. Later on in the day we were stopped by police at a checkpoint. The police were welcoming and enthusiastic to meet us. They never asked for our passports but instead insisted that we take a picture in front of a statue of a man they referred to as the John Cena of Sudan. Or the king of Sudan. Honky later told me that after taking photos one of the police officers was talking to him in Arabic gesturing to his crotch which made Honky very uncomfortable. During the heat of the afternoon we stopped at a water hut where some local Muslim men insisted that we join them and share a meal they were eating sitting on floor mats.  The food tasted great. Honky was told disapprovingly not to use his left hand for food. I assume its because the left hand is considered unclean.

Pit toilet,  aiming for the hole is important. 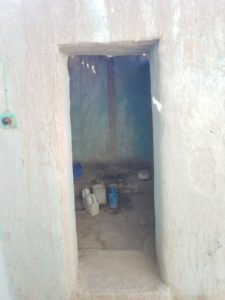 Entrance to the pit toilet.

“John Cena” of Sudan. with one of the guys at the police checkpoint. 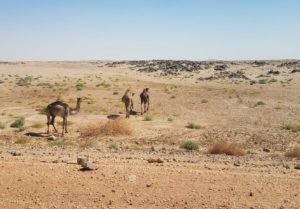 One Reply to “November 24th”