After packing up and drinking coffee, Arthur, Gilles, and I were on the road. The hotel owner who brought us hot water to make Arthur’s powdered coffee requested that we pay him. Arthur told him he was crazy and that there is no way we were going to pay him for hot water. He didn’t argue further and we left. We rode for 27 kilometers to the border where we entered Uganda at the town of Cyanika. I’m happy to say the border crossing process was quick and a lot less painful than our experience entering Rwanda. On the Uganda side we bought a chapati and egg burritos and continued on. We rode with Gilles until Kisoro where we parted. He wanted to stay and hike with the Gorillas the following day. Shortly after,  I accidentally clipped a woman with my bike. She went spinning like a top and fell. I felt terrible and apologized profusely. Fortunately aside from a bruise she was o.k. A couple miles later we started a climb. On our way up the mountain it started to rain. The rain kept me cool and felt great. The climb was terrific. We went through pine and bamboo forests and had excellent views of the landscape. Near the top I was very hungry and we were fortunate to come across a trading center where Arthur and I bought eggs, fried beans, and chapati. On the way down we got our first views of Lake Bunyoni. We decided to take the direct route and follow the lake along a dirt road to Kabale. The road was in decent condition and I enjoyed watching the sun set as we rode along. Around 7:30 p.m. the sun had set and it was dark. We were still 15 km from Kabale. At this point Arthur and I had been harassed by a number of children. They were friendly and I stopped a number of times to answer their questions “where are you from” “where are you going” and to say no to the begging for money and pens. However, no matter how long I stopped, when I started biking again they would chase and grab at my bike following me for hundreds of meters. I didn’t have time to waste and quickly tired of the games. I yelled for them to go home which had little effect aside from a few laughs from the parents and other adults nearby. Thankfully when it got dark all the children disappeared. I turned on my bike light and put on my headlamp and we rode several hours into the night. The stars were beautiful and I had occasional views of the lake lit up with the white lights from local resident’s huts. I could see lightning in the distance. The road descended the last couple miles into Kabale. It was an exhilarating descent and required all of my attention to avoid hitting potholes and bumps. In Kabale we found an affordable hotel and walked down the street for food. A man we saw earlier in the day at the border, nicknamed “Big Daddy”, was impressed with our progress and offered us a free drink if we wanted to come to his bar. I was too tired and crashed after dinner. 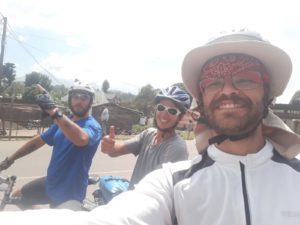 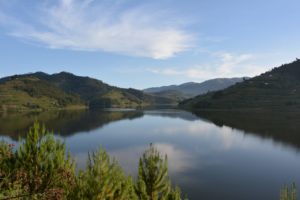 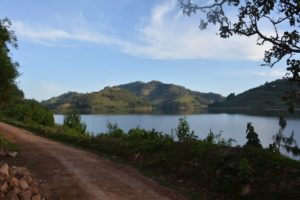 The dirt road along the lake