Skip to content
Dec31/1  The bus ride was interesting. Right after boarding the bus a man stood up in the aisle and started chanting. I at first thought the man was crazy. He continued on for several minutes. Once finished, people clapped which made me realize it must have been some sort of long winded Christian prayer. Very rarely has there been a dull moment on this trip so far. For the rest of the bus ride the driver blasted music with plenty of wailing and bad techno auto-tuned voices. It was difficult to sleep. When we made it to the border of Rwanda we first had to get our fingerprints taken on the Uganda side. We saw a poster which warned of unpleasant work conditions, forced sex slavery, human sacrifices, and organ harvesting in Uganda. On the Rwanda side were told, by less than friendly border agents, that we needed a hotel reservation to enter. Neither one of us had cell signal, however a nice Rwandan passenger let us borrow his phone for the booking. After completely emptying our bags for inspection and confiscating our plastic bags, which are not allowed, we were free to continue the bus ride to Kigali. The climate has changed from Uganda which was hot and clammy. Just outside of Kigali we rode through dense cold fog and once in the city it was cloudy and rainy. Kigali is a neat city. Like Addis Ababa it is mountainous. Many of the houses are built on slopes, and the city center is up on top of a hill. Arthur and I found a cheap hotel at the edge of town. I reassembled my bike and we met another cyclist, named Gilles, who is riding the same route. We found a great burrito joint for dinner. 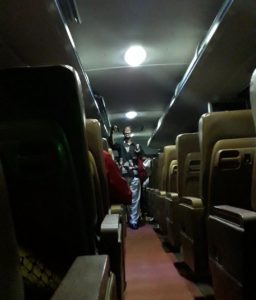 One Reply to “January 1st”