I awoke at 3 am and was out by 4:15 am so I could get to the town of Gedaref early enough to get my Ethiopian visa. I didn’t sleep well last night as the police came in several times to arrange furniture for another guest who arrived later in my room.  It took longer than I anticipated to bike the remaining 90 km to town because I was riding against some nasty winds. I made it to town by 10:30 am and met Arthur and the Canadians at the consulate to get our visas. I bought some grilled chicken and ice cream for lunch and spent the rest of the afternoon at the Motakwil hotel. I later headed out alone for dinner. I found some more Foole and got some hard boiled eggs shredded on top. It tasted great I don’t think Ill ever get sick of eating beans. There hasn’t been a lot of variety in my diet while travelling through Sudan but I’m normally pleased with the meals. I’m thankful that I enjoy beans. The Canadians don’t share the same love for beans and have been having a difficult time finding other food choices. After finishing my meal a Sudanese man named Munadil and his father sat down at my table. They insisted that I share their meal with them.  I politely declined as I was already full but hung out with them as they ate. Afterwards Munadil bought me tea and I enjoyed talking with them both and hearing their stories. They live 15 km outside of town on a farm and were nice enough to invite to stay with them for the night. I wish I could have stayed with him but I couldn’t because we are all leaving in the morning for Doka. 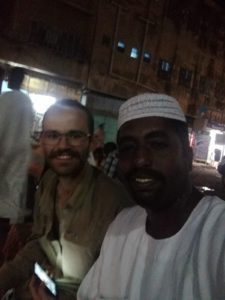 Nice man I met at dinner in Gedarif named Munadil