I awoke this morning hoping I would feel well enough that I could bicycle. If I couldn’t bicycle I would be forced to skip the section from Wad Medani to Gedaref (the next town) in order to make it to the Ethiopian consulate to get my visa before they close for the weekend (Friday Saturday for Muslim countries). Thankfully I felt well enough to give it a shot. I need to bicycle 230 km in a day and a half which is ambitious considering I have not eaten much in the past few days. Arthur and the Canadians did not feel well enough to bicycle and agreed to take the bus and meet me in Gedaref so I’m cycling this section alone. I left the imperial hotel by 4:30 am and faced some strong headwinds for the first couple of miles. After the sun came up I heard some gunshots nearby and was relieved when I saw it was just a farmer killing a goat. Shortly after while I was looking down at my phone I hit a sizable pothole which sent me flying. Fortunately aside from a couple scrapes I was fine. I put a few holes in one of my bags and destroyed a pair of headphones but was on my way again after cleaning my scrapes and re-seating my bike chain on the cassettes. I stopped at a police checkpoint briefly for a cold mango drink and continued on. At 10:00 am I rode through the small village of Fao. I was making good progress and decided I had earned a break having cycled 82 km (50 miles). I stopped at a small building on the side of the road to order some food. Upon entering the restaurant most conversations quieted down and people turned and stared at me. This is fairly common as the small towns I’m travelling through get few foreigners. I met the stares with a smile and polite wave saying “salam” which means hello in Arabic. The people responded in kind and most returned back to their conversations. I ordered some Foole which came with fresh tomatoes and bread. By the time I saw the man put the tomatoes in the beans it was too late to say no. I took a chance and ate the Foole anyway. After this last bout of food poisoning I’ve become reluctant to eat any uncooked vegetables or foods. I was eager to keep going because it was still cool outside and finished my meal in 15 minutes. Just after leaving Fao, Arthur, and the Canadians caught up in their bus and stopped for one of the guys to defecate behind a small bush. The ride looked unpleasant, the 3 of them and their bikes were crammed in a small minibus. I talked with them for a few minutes before I was off again. I saw a Sudanese man on the side of the road and slapped his hand. He said something in Arabic and when I continued riding started yelling and sprinting after me while motioning for me to stop. Suffice it to say I had no intention of stopping for this mad man. He was a fast sprinter and began to gain on me as I tried to pedal away. It should be easy to out pedal someone on foot however accelerating with 100 lbs of gear and into the wind is often slow going. As I looked back I couldn’t help but smile from the thrill and adrenaline of the chase which seemed to further infuriate the man. About 100 meters down the road the angry man began to tire and I out cycled him. In these journals I make an effort to give an authentic account of what my trip has really been like both the positive and negative experiences. I don’t want to give the wrong impression of Sudan. this was the only experience I’ve had this far in Sudan where I was a bit concerned for my safety. Almost every day I have truck drivers pass me by and ask if I’m ok, people often greet me with enthusiasm and welcome me to their country. I overall feel safer in Sudan than I do back home given how I’ve seen the Muslims of Sudan look out for me and each other. Life is difficult here in Sudan and there is an established age old tradition of hospitality. As I continued on I cycled past mountains and through a pass which opened up into sweeping plains. It was now becoming increasingly hot and I had to cycle another 25 km (15 miles) before I came upon a small roadside town. At this point I had ridden 140 km. Tomas the Irishman informed me that the next town wasn’t for 45 km. It was only 1:30 pm but I didn’t have the energy to continue on. I found a place to sleep in a small hut and slept all afternoon. As it was getting dark I was told I had to register with the local police. The police were nice enough to let me stay at the police station for my safety (not really given a choice).  It’s kind of embarrassing but its fairly common when I tell Sudanese people I’m from America they respond with “America #1”. Its not unlikely that the local police feared the repercussions should something happen to an American in their town. Regardless it was the nicest place to stay in town having electricity, a cement floor and four walls and I was thankful. 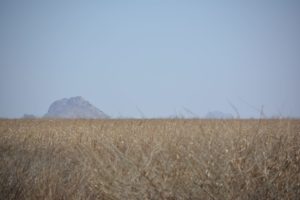 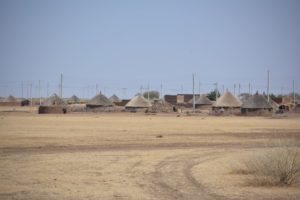