It was loud last night. I woke up periodically as people were talking or entering the cafe right past my cot.  I remember waking up at one point and seeing 2 Sudanese men wrestling in the dirt nearby.
we were out riding by 5 am and stopped for coffee and Chai tea at a small village along the way. A nice Sudanese man insisted on paying for our tea. Midway through the day we found a place to buy Foole and eggs. It was difficult finding the motivation to keep going given how hot  it was at this point but I was excited to get to a hotel in Wad Medani. Before leaving the cafe I grabbed a pitcher of water and poured it all over my clothes. I was half worried the locals at the cafe would be offended by me wasting water but I think they found it humorous instead. As I was almost to Wad Medani, I got stopped by a bunch of bored Sudanese police at a security checkpoint. I was somewhat delirious from the heat and frustrated when I got asked the same questions by 5 different men at the checkpoint but relieved when they finally let me go.  I crossed the Nile on a bridge and observed a bunch of men baking mud to make bricks. We all decided to stay at the Imperial hotel. A somewhat rundown hotel but still luxurious compared to what we were used to so far in Sudan.  It had air-conditioning, power outlets, 4 walls, a shower, western flushing toilet, and glass windows. 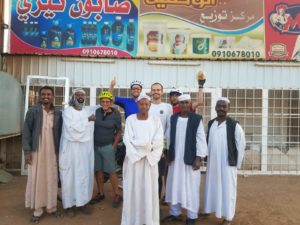 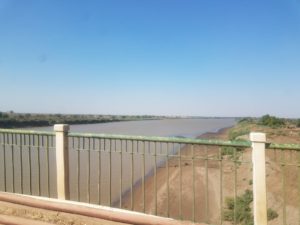