I stayed up all night updating my journal and sending pictures. I was very excited when the van arrived this morning. We packed up and the taxi driver strapped both bike boxes to the roof. I was a bit apprehensive that they would fall off given the shoddy way the driver strapped them down. Fortunately we made it to the airport without any issues. Checking our luggage with Kenya airlines was anything but simple. We had to pay for the airline to  wrap our improvised rice bag luggage in plastic film. It took nearly 1.5 hours to check the bikes. The Kenyan Airway manager demanded that we pay in USD however American money is very difficult to acquire here in Ethiopia without losing a lot in the exchange. By staying firm and saying I wouldn’t pay in USD and telling him he would have to accept the currency of Ethiopia he finally conceded. When we boarded the plane I was relieved to have made it in time for the flight and also to have a few hours aboard to relax. The flight had good food and we were able to secure exit row seats on both flights. I was very happy to be on a flight out of Ethiopia, however I had the uncomfortable feeling that I was escaping Ethiopia too easily. When we landed my suspicions were confirmed. The airline was insistent that our bikes were not “lost” only “missing”. This verbiage did little to assuage my fears and we would spend the next 2 days waiting for our bikes to show up. With some haggling we got a taxi to Kampala the capital of Uganda. With services like taxis that are readily available I’ve found it’s best to offer a price well below what they are asking and when they decline walk away. Often these guys are desperate for business and are more willing to negotiate when they know you are prepared to take your business elsewhere. When we made it to Kampala we found an affordable hotel for 40000 or about 10 USD for a room in the old district. The streets here are bustling with motorcycle taxis. I would say there are easily 2 or 3 times more motorcycles than cars. The “Boarders”, as the Ugandan locals call them, fly through the streets at sometimes reckless speeds and bob and weave through traffic in hordes. This makes crossing the street as a pedestrian a somewhat treacherous endeavor. Not even the side of the streets are safe. When cars get backed up in the streets the Boarders take their bikes  up on the sidewalk. After settling into our hotel, The Rock Classic, we headed out for food. We found a street vendor in front of a bar cooking meat, french fries, and eggs. I bought several egg Chapati burritos and sat in the bar to watch the soccer game. The bar was booming and it was entertaining to watch the game as rowdy Ugandans stood up and yelled whenever a goal was made 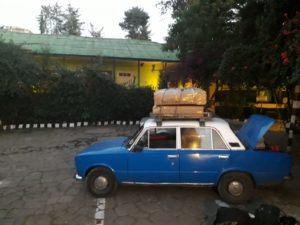 Not stoked about how these bikes were strapped down but fortunately they didn’t fall off during the drive. 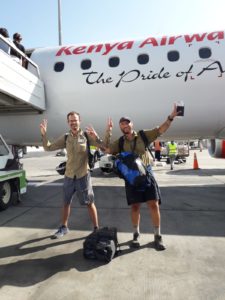 Happy to be leaving Ethiopia 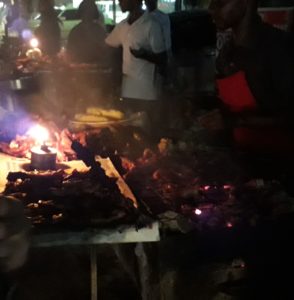