After yesterday, I was tired and slept in until 6:30 this morning. Arthur left without breakfast but I stayed behind  with Adrien, Simon, Tomas at roadside shop in Dejen for eggs. We each asked for 5 eggs but only got a small amount. They all left and I ordered another meal of Shiro (an Ethiopian traditional food) which consists of powdered chickpeas,onions, garlic and tomato. It typically comes with Injera but I ordered it with normal bread. I am happy to say its been over a week since I’ve had to eat Injera and I hope to finish my trip without eating any more. After these two meals I felt full and ready for the descent into the Blue Nile Gorge and the 1400m ascent that follows for 20km. The road down was treacherous. Large grooves had been worn into the pavement over time. Potholes and bumps were abundant and the road frequently turned to gravel or rocky dirt for small patches. I had to brake often to avoid gaining too much speed and becoming air born upon hitting bumps. The road was steep and my brakes and bicycle rims quickly heated up. I was a bit nervous that I might melt the brakes from all the heat. I passed a number of large trucks which were traveling slowly down the road to avoid hitting potholes and in order navigate the sharp turns. By the time I reached the bottom I was ready for a change and excited to start climbing. I crossed over a bridge and a police checkpoint. The police waved there hands and gestured for me to stop. I waved at them and pedaled away. It sometimes feels like the police are out to make your life difficult and I didn’t have the patience this morning to empty all my bags out or explain my trip itinerary. I was also fearful after my experience in Egypt that they might tell me I couldn’t cycle on this road. Thankfully they did not follow me and I began the ascent. Along the way there were a number of baboons and I stopped to take pictures of them.  It was neat slowly climbing out of the gorge. I was only able to pedal 6-7 km/hr (4-5mph). The Blue Nile Gorge is Ethiopia’s version of the Grand Canyon in America. The road had a number of turns and often opened up to large views of terraced farm landscapes. Halfway up the climb I stopped in the small roadside town of Filiklik. Tomas caught up and we both sat down for lunch. I bought some biscuits and ordered scrambled eggs, a coke, and two coffees. I talked to a couple of locals including one crazy Ethiopian who had his shirt pulled up and stomach pushed out and kept talking to me in amharic as if I could understand. The other guy I was talking to spoke English well and told me not to mind the crazy man. We watched as hordes of children in matching uniforms finished school for the afternoon and walked up the street for lunch. By the time we finished lunch it was getting warm out so I took a few pitchers full of water and poured them all over my clothing. The remainder of the ascent went smoothly. A few children were asking for pens and money but they were not aggressive. I made an effort to wave, smile, and keep the children engaged in conversation as I pass, to minimizes my chances of getting stoned. An hour or so later I reached the top. I noticed my front wheel was wobbling and stopped to tighten the bolts. 4 or 5 teenagers crowded around to watch me and ask questions. I don’t like being crowded especially when I am preoccupied working on something. I struggled with this earlier in the trip when I was in Sudan. I have since become accustomed to it and have accepted that its just part of the experience being a white man traveling through rural villages in Africa. A kilometer after tightening my wheel, I arrived in Gohatsion and caught up with Arthur and Tomas. The two Canadians have taken a bus to another town further south. Adrien has been throwing up and feeling ill the last couple days. We suspect its altitude sickness. I checked out a number of hotels and settled on one that was clean, large enough to hold my bike in the room and only 100 birr (less than 4usd). I had a hell of a time communicating with the two kids running the hotel. While inexpensive, the trade off at this hotel was that there was no running water. Instead I used a bucket of water to flush the toilet and wash my hands. I ordered an egg sandwich and Shiro for second lunch and relaxed for the remainder of the afternoon. We only biked 40km but we hadn’t anticipated making much progress and were all happy to have made it up the gorge. I had a vegetable sandwich for dinner at a hotel across the way. Upon returning to my hotel one of the kids hovered over me as I unlocked my room and he cut a nasty fart that unfortunately got trapped in my room as I shut the door. 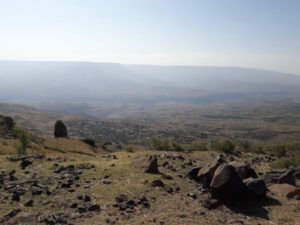 Near the top of the climb. 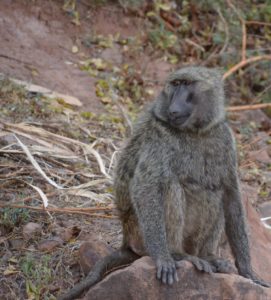 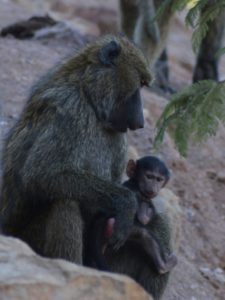 Baboons on the ride up Blue Nile Gorge.