We biked to Bahir Dar today. We had a number of school children throw rocks at Arthur and me. None hit me thankfully but Arthur got hit in the back and got off his bike to chase the children. The horn I have is often enough to stun the children long enough to distance myself. I still had a pleasant day of cycling and enjoyed the rolling green hills. We stopped at the Paradise cafe in Wereta and enjoyed breakfast. Mid meal I watched a power line transformer explode and send arcs of bright white sparks into the air. A group formed to watch the spectacle. The pole soon caught on fire and men started throwing dirt at the transformer to try and smother it. The power went out across the neighborhood. We continued cycling. As I got close to Bahir Dar I passed a college of agricultural and climate sciences. The city of Bahir Dar is neat. It’s interesting to see modern buildings again and a western resembling city. The people of Bahir Dar seem to have an unhealthy obsession with having clean shoes. On almost every street corner there were hustlers offering to clean my shoes 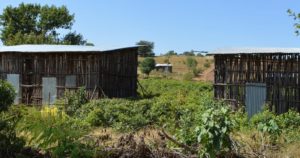 Ethiopian traditional homes. Eucalyptus wood and mud sealed houses with tin roofs. Eucalyptus is not native to Ethiopia but grows quickly and has been planted everywhere for timber