We left Gonder for Addis Zemen.  Adrien and Simon our two Canadian friends were several days ahead of us as they didn’t go on the Semien mountain tour and had agreed to wait for us in Bahir Dar.  It’s odd to admit it, however after  traveling for more than a month now, it feels like I’m suffering from culture shock. Ethiopia is very different from Sudan. Throughout the day I had a number of children throw rocks at me when I refused to give them money. There was even a man in his 20’s  who threatened to throw a large rock at me until I acknowledged him and shook my head to say no don’t throw that at me. He laughed and dropped the rock. Little did I know at the time that this would not be the last time I was threatened by an adult. Before our second large climb of the day, the three of us stopped to eat some bananas and bread at a café .  We attracted a small crowd of children who were intrigued by us and watched our every move. On the climb up,  several young adults took an interest in the bread and bananas strapped to my bike. I told them a number of times that they could not have my food. I was tired from the climbing and in no mood to acquiesce to the constant nagging.  Today I’d encountered demands by Ethiopians for money, office stationary items such as pens and several other odd request. The people are not starving in Ethiopia it seems more like an expectation that since I’m white I should give them stuff. If I agreed to every request I would likely be walking the streets destitute and completely naked.  Anyway, the men started grabbing for my food on the bike and I was close to exchanging punches. I never thought I’d be close to getting into a fight over oranges but I had had enough. Luckily it didn’t come down to fighting and I kept pedaling up the mountain. I summited the peak and screamed at a kid who angrily chased me for the bananas strapped on the back of my bike, even after I told him no several times in a calm mild mannered tone. Today I learned to conceal my food within my backpack so it is not visible while riding. The descent into Addis Zemen was exhilarating and I was able to reach 30 to 40 mph with fantastic views which made the climb up well worth the effort. We found a cheap hotel for 100 Birr per room or about 4 us dollars per night. I ate pasta and eggs for dinner and enjoyed a beer at a bar playing reggae music. 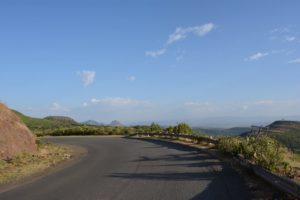 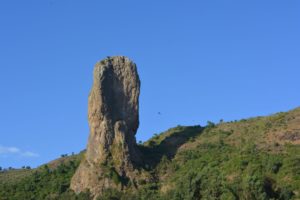