A number of events occurred over the last couple days. Arthur and I were on the fence about whether we were going to cycle southern Ethiopia. Adrien, Simon, and Tomas had already booked a flight to Uganda to avoid the region. Our original planned path routed us through the border town of Moyale which has erupted in inter-tribal violence within the past few weeks. We had heard reports of burning buildings and dead bodies on the streets of Moyale. We were of the belief that changing our route to go further west, through Lake Turkana instead, might allow us to avoid such the violence and bloodshed. We spent several days talking to several different diplomats, people on the streets and the local police. Almost everyone advised us not to travel further south. It was an Ethiopian government official, named Tetebe, who finally convinced us to abandon the idea when he mentioned civilians being killed in several of the towns as well as grenades being thrown. He said biking through the region was like going through a pack of wolves that may, or may not,  attack. As difficult as it is to concede to skipping the southern half of Ethiopia Arthur and I agreed it was not worth the risk and booked flights to Uganda. In town I also lost another phone to theft. I had it mounted on my bike for navigation. A man who had just given us directions to where we needed to go,  went to shake my hand. When I shook his hand he pulled me off balance and snatched my phone out of the mount. I threw my bike down and chased after him. I didn’t stand much of a chance in flip flops and threw them off. As I chased him over a garbage dump barefoot, he turned up a busy street and disappeared. My feet were badly cut up during the barefoot chase.  I spent a couple hours talking with the police, which I figured was a waste of time , but a local had insisted they could find my phone. Nothing came of it and the next day Arthur and I headed to the Mercato, or market section of town, to fix Arthur’s phone which was broken and find a new one for me. Our stay was not entirely negative in Addis Ababa. The Ethiopian traditional food in town is phenomenal and I drank fresh avocado, and mango juices almost every day. A nice man at a bike shop also helped us out by giving us boxes to package our bikes for the plane. I was also able to relax and do a lot of reading. 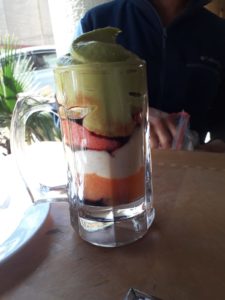 One of many fantastic juices I drank in Addis Ababa. 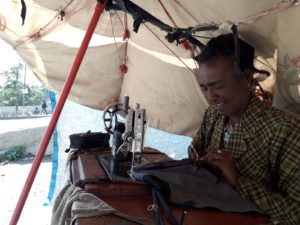 The nice woman who fixed my shorts and bike bag zippers. 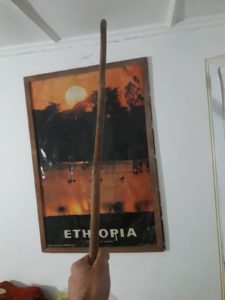 Watch out Ethiopia I have a stick!